↓
HitchhikingTips.com » How Appearance Affects Perceptions of One Another

In this article I am explaining how appearance affects perceptions of one another and why first impressions based on appearance are highly relevant in relation to hitchhiking.

Physical appearance and first impressions are closely connected. Once I was asked if I, as hitchhiker who gets rides from hundreds of people every year, always stop to pick up hitchhikers when I am not hitchhiking but simply in a vehicle and have the possibility to give rides to other people. My answer was: “absolutely no; I look carefully at the hitchhiker before deciding to offer a ride paying attention to certain details which to me, as hitchhiker myself, are indicators of a potentially trustful person”.
These are some indicators of your physical appearance which often will help You make positive first impressions based on appearance and get rides from drivers who usually are willing to pick up hitchhikers:

Your haircut together with the clothes You wear build up the image of yourself that You automatically market to anybody who sees You as soon as You get out of your house. And guess what? These two parameters combined with the way You walk or stand make a first impression about You in who sees You.

Other details of your physical appearance such as piercings or tattoos also affect the first impression You make in the people who see You; removing the piercings from your face and covering the tattoos that are visible before getting on the road contributes in making a more positive first impression and getting rides easier.

Besides your physical appearance, to appear as friendly as possible and make better first impressions is essential to smile. 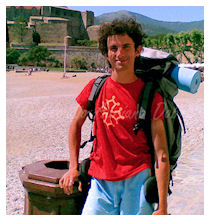 The colors of your clothes also affect first impressions. While in business meetings a person wearing black and other dark colors could be perceived as serious and reliable, wearing dark colors when hitchhiking will make people who see You feel afraid of You and not pick You up. When hitchhiking, bright colors like red, orange, grass green or baby blue, will contribute in making a good first impression and drivers will be more willing to give You a ride.

Here is an example of a simple fact related to hitchhiking that happened to me once but which had relevant effects on my trip of that day and which shows how appearance affects perceptions of one another.
In September 2014 was colder than in other years and I was hitchhiking on an European road on which I have hitchhiked many other times before. Dressed in layers, as outer layer I was wearing a bright blue t-shirt which inspired serenity in the drivers that noticed me on the road and made them stop to give me a ride thinking that I must be a friendly person. As inner layer I thought to wear a long-sleeves t-shirt to keep my arms warmer, but since I had no bright colors I put a black one.
In the early afternoon, as it got warmer, I removed the blue t-shirt I worn in the morning leaving on me only the long-sleeves black one, but since I was focused on getting rides I quickly removed the blue one not paying attention to the fact that now I was looking like a man dressed in black, fact which made people not stop to give me rides for the next few hours.
After a while that I was not getting rides anymore, I finally started analyzing the situation asking myself why this was happening: I was in a good spot where vehicles could stop, I was sure that the people in the area where I was used to easily take hitchhikers, I was visible from enough distance, and then when I analyzed myself the answer was crystal clear – people felt scared of giving rides to a stranger dressed in black simply because black conveys fear.
At this point, becoming aware of what was going on, I changed my clothes putting on my bright blue t-shirt again and 2 minutes later I was in a vehicle having a conversation with a nice driver and enjoying the ride.

Here is another example, not related to hitchhiking, of how appearance affects perceptions of one another:
When I was a teenager I remember there was a period in my life when I used to like rap music. Most of the time I was dressed as a rapper as well.
One day, dressed as rapper, I walked inside a nice shop which was selling elegant clothes. As soon as I stepped inside I remember the staff working there, without saying anything but simply the way they looked at me, made me feel as if I was not welcome in their shop and wanted me to leave as soon as possible. Their look made me feel uncomfortable so I immediately left.
Few months later I remember I got a job as sales agent and obviously this type of job required me to wear nice clothes which conveyed seriousness and reliability.
One day after work, while I was still wearing my nice clothes that I had at work, it happened that on my way home I walked by this shop in which months earlier, dressed as rapper, the staff who worked there made me feel as not welcome. I don’t know why I stopped in front of it and decided to step inside this shop again. I noticed there were the same people working there. This time, however, things went completely different: as soon as I walked inside they were all smiling at me and one of them said to me in a polite friendly manner “Good evening, can I help You with something?” making me feel more than welcome. They didn’t remember my face. This time was the same Me that I was months earlier when I entered their shop the first time, I still liked listening to rap music, the only difference were my clothes.

Have You ever heard the saying “there is no second chance to make a good first impression”? This is true. In the field of hitchhiking first impressions based on appearance count – they often make the difference between getting a ride and not going anywhere. Before starting your trip, to find rides easier make sure that your appearance conveys a positive image of yourself.

> The Importance of Smiling in Communication