↓
HitchhikingTips.com » Where to Sleep When Hitchhiking & Backpacking

In these hitchhiking tips, I am explaining how to find free places where to sleep when hitchhiking and backpacking.

Concerning one’s safety in relation to where to sleep when hitchhiking and backpacking, in time I noticed that some hitchhikers and backpackers feel safer by camping and sleeping far away from the eyes of other people while some other hitchhikers and backpackers feel safer by sleeping where there are lots of other people watching. The choice is personal. About camping and sleeping into the wild, big predators could pay You an unpleasant visit while You are asleep, like bears for example. About sleeping where there are lots of other people around, someone could steal your stuff while You are asleep or even hurt You if You find yourself in an area where people are xenophobic – cities, towns, and villages, in time I noticed that usually the smaller they are the safer they are and train stations, bus stations, and parks are often the most dangerous places so is safer to stay as far as possible and be careful when nearby especially at night, not only when planning where to sleep but also when walking around in search of free places to sleep avoiding to attract unwanted attention.

I do both, depending on where I find myself and what the location has to offer, so based on my experience accumulated during the years concerning where to sleep when hitchhiking and backpacking I see two options for You: either You have with You only the sleeping bag but no tent, either You have both sleeping bag and tent.

Only with a sleeping bag is possible to sleep outdoors by finding a covered place that prevents You from getting wet while asleep in case of rain, like for example the entrances to buildings that have a mini roof which extends for one-two meters. When You don’t have a tent and You are looking for free places to sleep, a good place is one that protects You also from wind, at least partially, otherwise You risk to feel too cold to rest well.

In developed countries, I noticed that often the commercial areas are pretty quiet and safe at night. What You have to keep in mind is that the next morning You must go away about one hour and a half before the scheduled opening hours because the employees are expected to get to work earlier to prepare the shop for the day. Another thing that can happen is that on some days per week the shops get the goods delivered, usually a lot earlier than their scheduled opening hours, so someone could wake You up earlier on those days.

I remember that once while hitchhiking around Austria when I slept near the entrance of a supermarket in a small village, the next morning around 5 AM I got awaken by the truck driver that was delivering food to the supermarket and offered me breakfast. 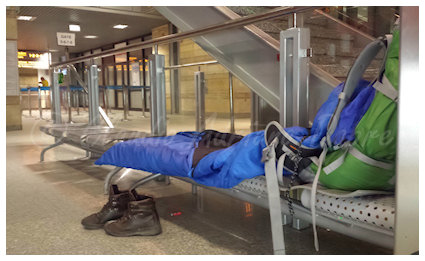 Big international airports that are open 24/7 often prove to be good free places to sleep while hitchhiking. Modern airports have areas built on purpose so that passengers who take early morning flights and that get to the airport in late-night can sleep there for few hours before their flight. If such an airport is along your hitchhiking route it might be wise to consider it as a potential place to rest for one night as finding accommodation in it could be easy.

A big disadvantage of having only the sleeping bag is that when You are inside a city, town or village, it takes a lot of time (even hours) to find good free places to sleep outdoors. Especially if You know that is likely to rain and so it won’t be possible to simply sleep under the stars as You would get wet. Another disadvantage of having only the sleeping bag is that if is not of top quality and there is lots of humidity in the air in the area where You intend to sleep, the next morning You will wake up with your sleeping bag wet, as during the night will absorb the humidity from the air around.

An advantage of having only the sleeping bag with You for camping and sleeping while hitchhiking is that without a tent your backpack will be lighter and this will contribute to saving your energy, especially when exploring the continent for several weeks or months. Another advantage is that from a sleeping bag it is very easy to get out, so in case someone comes to tell You to go away You can get up, pack it quickly and go away in a very short time.

For camping and sleeping when hitchhiking & backpacking, having also a tent with You besides your sleeping bag is better because You worry less about rain and wind, the sleeping comfort is increased, and the chances to easily find good and beautiful spots compatible with your tent where to sleep while hitchhiking are exponentially higher.

A disadvantage of sleeping in a tent is that, when You have to leave, it takes a quite long time to pack it. Another disadvantage is that in case of rain it may require to dry it at least a little before packing it and this requires additional time. 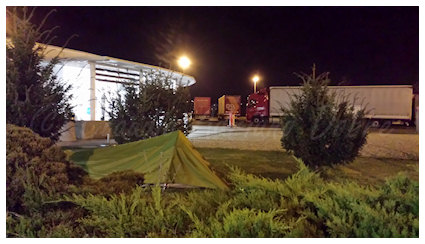 If You hitchhike in a developed area where petrol stations offer other services as well (like food and drinks) then the petrol stations are your “friends”. You can go to brush your teeth, wash and even have hot drinks for free.

After a night in the tent or simply in the sleeping bag under the stars, a hot drink will supercharge your mood making You feel a lot better.

In countries where people are friendly and petrol stations have a large green area within their perimeter, these often prove to be great places where to sleep while hitchhiking.

A golden rule that is good to follow also when preparing for camping and sleeping when hitchhiking consists in keeping the documents and money always on the body scattered in various places and always be ready to lose the backpack.

Being aware of the wild animals in the area where You intend to put your tent is good as well – some of them can be deadly. You are about to read a true story that happened to me. 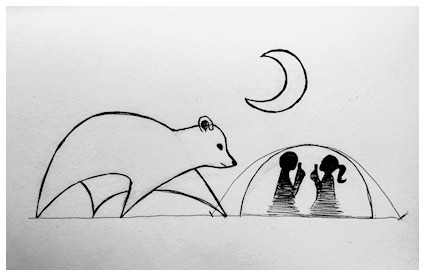 Illustration made by Agnieszka Mikutowicz

On the 22nd of September 2013, I was hitchhiking together with a friend through a region located in the central part of Romania. We were close to the town Hateg and we decided to camp for the night in an orchard located at the border of the town. We found a nice place, we ate some of the food we had in our backpacks, we put the tent and got ready to fall asleep. Then, after midnight, we heard in the distance far from us some dogs barking. I opened the tent and looked outside. It was complete darkness and there was such a fog that the visibility was reduced to less than 50 meters in any direction. I got back inside the tent and both me and my friend listened carefully to the dogs barking in the distance. After a short time, it seemed that the dogs were getting closer as we could hear them barking louder and louder until they got to about 10 meters from our tent. This is when we first heard a bear growling just near our tent and instantly everything became crystal clear to us: the bear felt the smell of the food we ate carried by the wind and came for food.

When the bear reached our tent, started sniffing and moving around our tent. After a few minutes, the dogs stopped barking and went away. We were now alone with the bear. We were standing still inside the tent, scared to death, listening carefully to what the bear was doing and where was it in every second, not making any sound and praying God to save us. At a certain moment we thought the bear would have been curious enough to try to move the tent but didn’t do it, just sniffed it. After about two hours, we didn’t hear anything anymore, but both I and my friend were too scared to go out to see if the area was clear so we stayed inside until morning arrived.

Before choosing that orchard to camp, we knew that there were bears living in the region where this town was, but we never thought that they would get so close to where humans live. The lesson that I learned from this experience is this: never eat where You want to sleep if your mind is tickled by even the slightest thought that dangerous predators could be in your area.