Is hitchhiking illegal or legal? The brief answer to this question is: it depends on location and is best to check the laws on hitchhiking of each country and state before planning your route. Here I will answer to the question “is hitchhiking illegal” only in relation to road vehicles, as this is the most common form of hitchhiking, but as You may know, is possible to get rides in any vehicle (cars, trucks, trains, motorbikes and even airplanes).

Is hitchhiking illegal on motorways and express roads?

In some countries, such as Italy, petrol stations and rest areas on motorways are considered as integral parts of the motorways, the access of the pedestrians is forbidden also in these parts and this makes hitchhiking illegal also in such locations in such countries. The Article 175 paragraph #7 point (b) of the Italian Road Traffic Law states (translated into English):
“On roadways, ramps, junctions, service or parking areas and in any other motorway related part it is forbidden to: b) request or give rides”

In most of the countries worldwide is legal to hitchhike on smaller national roads, however many countries all around the world consider hitchhiking illegal in bus stops.

Some states in Canada and USA consider hitchhiking illegal no matter the type of road on which is practiced, according to some sources at the moment of writing. If You live in Canada or in the USA, before planning your trip You should check the laws on hitchhiking in the states where You intend to travel.

Some border crossing bridges are illegal to cross on foot and the crossing is legal only with vehicles. In such cases my hitchhiking experience accumulated during the years recommends that is best to find a ride 100-200 km before the bridge that has the role of border crossing, this way the driver will feel comfortable enough to be willing to go with You through the customs and take You on the other side of the bridge.

Is hitchhiking illegal with truck drivers? 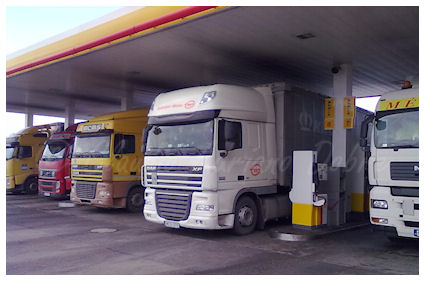 Truck drivers who transport ADR are subjects to additional limitations and, because the fines are quite heavy, in time I noticed that many prefer not to risk by taking even 1 hitchhiker (which would be legal when transporting other goods than ADR). In Europe, trucks transporting ADR are easily recognized as they carry an orange rectangular plate with some numbers on it defining the type of ADR that they are transporting.

Meeting police while hitchhiking happens almost on daily basis – either is about random road traffic police controls, either border police, either simply stumbling upon police cars patrolling through the area where You are hitchhiking in that moment. Is possible that sooner or later You will find yourself in a spot where police officers passing by will feel like wanting to remind You that where You are is not the “optimum” place to solicit rides. In such cases my personal experience accumulated during the years practicing this sport suggests that the easiest way to deal with such situations is to say “I am sorry, I did not know” and then move to another place and continue to hitchhike.

While some countries consider hitchhiking illegal, in others not only is legal to hitchhike but is also encouraged, such as in the Netherlands. In the Netherlands, in comparison with other countries where hitchhikers have to know how to find the optimum spots to find rides to get out of cities, there are places built on purpose, “liftplaats”, and marked with appropriate road signs so that people who intend to hitchhike can go to such spots and easily stop road vehicles.